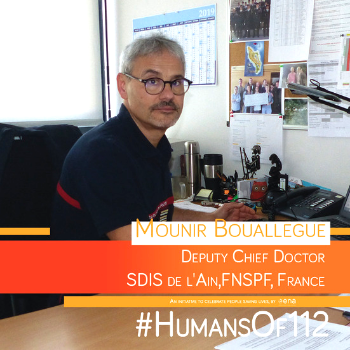 I am the deputy chief doctor for the health service of the fire and rescue service of l’Ain. I’ve been a medical firefighter – professional or volunteer – for 14 years. I was an emergency doctor and I was attracted by the diversity of the missions of the firefighters. In France, firefighters fight fires, help in case of disasters, attend to road accidents and give first aid. The most rewarding part of my job it helping people in distress.

In France we don’t have interservice call centres which bring together police, firefighters and emergency medicine. Each service in each department has its own call centre. In France, 112 is most often received by the firefighters. In l’Ain, the information is shared between the firefighters and the SAMU (ambulance service) through a common platform. We find that this solution allows us the best exchanges and to work in collaboration for the good of the victims we save.

There is one experience which changed my life. I myself was saved when I had a cardiac arrest. I’m here today to talk about it thanks to all the people in the rescue chain who were particularly effective that day. Thank you again to them.

Two years ago, I went out to ride my bike, as I often did. I had a cardiac arrest, fell and lost consciousness. I gained consciousness a few days later in the intensive care unit with no lasting injuries. Someone driving a car, who witnessed me fall, stopped and called 112. It turns out that he was also a recently-trained volunteer firefighter. Realising that I had had a cardiac arrest, he immediately started CPR. It was then taken over by the firefighters who arrived on the scene with a defibrillator. I was given CPR for over 40 minutes and defibrillated several times, then the SMUR hospital team continued the medical care by taking me to the intensive care unit.

This experience encourages me to keep proposing improvements to optimise the way we help people. It also motivated me to support training the general public in first aid so that everyone has the same chance for survival as I did, with witnesses acting to alert 112 and carry out simple procedures like CPR immediately.