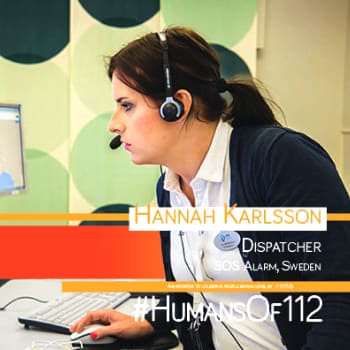 Working as an emergency dispatcher is challenging and sometimes stressful, but also very rewarding and developing. No one day is like another. In one call, I am a detective and have to solve a new problem, and in the next call I give emergency advice after a traffic accident. Sometimes when answering an emergency call, you feel like you’re caught in a situation like in a Hollywood movie and you must quickly get an idea of the situation through what you hear on the phone.

I wanted to do this job to make a difference to people’s lives. To be able to help others. I’m inspired by the person that doesn’t just pass by. The person who stops to help a stranger who is ill or who has suffered an accident on the street. A real hero. Many may think they did all they could by calling 112, but doing a little more can make a huge difference. There are small, risk-free things that the dispatcher can guide you to do while waiting for the rescue services, like freeing airways. Simple things that sometimes can mean the difference.

Once, I answered a call to a woman whose mother had stopped answering, was making strange breathing noises and had become cyanotic. I recognised the signs: cardiac arrest. Her father was in shock in the background. I quickly decided that the caller should give CPR and that together we should save her mother. I told her to concentrate and listen to my instructions. She did CPR until the ambulance arrived. Her mother’s heart started again and afterwards, I was told she was in the hospital, talking and awake. This situation made me understand how big a difference you can make as an emergency dispatcher.

My best tip is to never give up. It’s better to have tried and failed, than not to have tried. There was one situation where I dared to think outside the box and went beyond the normal routine when my intuition told me to, and it saved someone’s life. A man had a cardiac arrest in the countryside and the caller couldn’t do CPR for a long time. I called a nearby wood company to take a defibrillator to the patient. They arrived long before the ambulance, and could help the tired woman doing CPR. That’s why I received EENA’s 112 award for Best Call Taker in 2018.