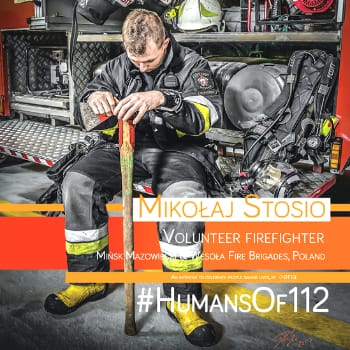 I’ve been interested in firefighting since I was 6 years old. My dad took me to a local Fire Rescue Unit to see his friend who showed me the fire house and their fire engines and told me about being a firefighter. When I was 12, my English teacher told me that her father was a volunteer firefighter and asked if I wanted to join the Volunteer Fire Brigade. I obviously said that I would love to… and that’s how it began.

I’d like people to be more aware that we are volunteer firefighters and we have families, jobs, we study… we have normal lives. Sometimes we have a house fire at 3 am and then we go to work/school at 8 am without any sleep, completely exhausted.

I’ve taken part in several hundreds of rescue operations. Every call is different and each of them has given me more experience and let me see things in a new way. We sometimes deal with car accidents, we sometimes meet with death, sometimes with heavy structure fire, sometimes with helplessness. We have to know how to fight fires, but we also have to be engineers, we need to know first aid and we should be a little bit like psychologists or therapists.

But what I remember most is a car accident when one driver died and the driver from another car didn’t have any injuries. They were both friends and work colleagues sitting at the same desk in one office. The hardest thing about this job is knowing about the injured person’s life. We have to talk with victims and after we “meet them” we get a little bit closer to them. If I hadn’t known that those two men from the accident were good friends, I probably wouldn’t remember that accident.

One winter, we were called out to a house fire. The roof of an old, wooden house was on fire. A young boy evacuated his mother and younger sister from the house just before we arrived on the scene. We extinguished the fire and took care of them in our fire engine until medics arrived. A few days after this fire, we received an email from this woman with thanks for our quick respond. That was the first time (after 3 years) that somebody thanked us for what we do. I think that the most rewarding thing is just a simple thank you.