This year we celebrate the 10-year anniversary of Manneken Pis receiving his 112 costume.

There are no rules (you can choose how many awards you will hand and the place of the celebration).

We’re inviting you to choose your heroes!

On this day, we celebrate together and EENA, as always, will share the various actions that are taking place in different countries.

From national ceremonies to celebrate emergency service personnel, to open doors for people to understood what is going on inside emergency services, as well as awareness campaigns. You won’t want to miss a beat.

Actions in the countries

The Department of Prevention and Extinction of Fire and Rescue carried out the 112 promotion through the governmental RSRS (government, firefighters etc.)

On 112 Day, the Federal Public Service Home Affairs of Belgium informed people about a new functionality: an interactive voice response system for the emergency numbers 112 and 101.

From the 112 day onwards, people who call 112 or 101 in Belgium will hear a message that offers the choice between ambulance and fire assistance (1) and police (2). Calls from callers that make the wrong choice or who don’t make a choice at all will of course also arrive in the call centre and be handled.

Before 112 day, if you called 112 in Belgium you would will be redirected to the emergency number 101 and because of this, valuable time may be wasted. One of the advantages of this simple interactive voice response system is to help people to get help from an operator specialised in ambulance or fire assistance (from a Belgian 112 call centre) or from an operator specialised in police assistance (from a Belgian 101 call centre) without the need to be redirected to another emergency number.

The Bulgarian Directorate National System 112 had a ceremony to award employees who have showed excellent works during the last year.

Also, a presentation was made about the future developments of 112 in Bulgaria with a special focus on Next Generation 112.

Civil Protection Directorate of the Ministry of Interior

This year the country celebrates 15 years of the European Emergency Number 112.

In cooperation with the local community and the emergency services, numerous events have taken place in the territories of all regional offices of the Civil Protection Directorate (Zagreb, Split, Rijeka, Osijek and Varaždin). Open days were held, visits to county centers 112, ceremonial sessions of civil protection headquarters, roundtables on “Climate change – challenges for civil protection”, education of preschool and school-age children and training of members of general-purpose civil protection units.

In Cyprus, all mobile operators sent an informative message to all their clients. Also, the Cyprus Post produced a special stamp for 112 Day 2020.

Furthermore, starting from February and throughout 2020, all television stations will broadcasted a short film produced by the Press and Information Office of Cyprus Ministry of Transport, Communications and Works.

The same film was also broadcasted on the screens of the main post offices, along with a banner about 112.

Information to be provided

In Denmark, the Copenhagen Fire Department will shared photos of their dispatchers, information about Advanced Mobile Location (AML) and their alarm center on social media.

112 competition: kindergarten children and families were invited to make the number 112 in the snow.

A media event summarising the last year and re-thinking the future.

In Finland, the main event was a 112 seminar in Helsinki. The event was attended by influential figures of the national safety authorities.

Dozens of public events were organised around Finland simultaneously. Security actors and authorities were present at the events.

The campaign goal of the Emergency Response Centre is to increase people’s awareness of the 112 number in the entire EU area, and to provide information on the 112 Suomi mobile application.

Actions were carried out in the different federal states

In Germany, the common project with all the main German Fire Brigades was to tweet from 08:00am to 08:00pm about 112, current emergencies, information about the different jobs and special units.

#112live; #Aachen112; #TwitterGewitter were some of the hashtags behind this campaign.

The Ministry of Health carried out an information campaign to build up a system of emergency doctors at the coordination centres to support ambulances in action by radio/telephone.

In Hungary, as per other years, the Emergency Call Centres did Open Doors to raise awareness of 112 Day to citizens.

The Emergency Call Center in Miskolc will focus on the work of call-takers. Participants were able to test the call handling system, visit the emergency response vehicles & learn about CPR and health care.

The Emergency Call Center in Szombathely had an Award Ceremony to award the best call-takers of 2019 as well as other emergency professionals and citizens to praise them for their services.

In Ireland the National Ambulance Service (NAS) shared different visuals to raise awareness of the importance of 112 to their citizens.

The videos feature some of the Emergency Call Takers, Emergency Medical Dispatchers, Paramedics, Advanced Paramedics and Ambulance Officers talking about their roles in the NAS.

The National Single Service for Emergency Number in Moldova

The National Single Service for the Emergency Number

On 112 Day, The National Single Service for the Emergency Number in Moldova, opened a new PSAP in Chisinau.

At the event, were present the representatives from the government, Emergency Response Organisations, media and the 112 Team.

After the official ceremony, they had an Open Doors event.

Every year on 112 Day, 112 Georgia does a ceremony to recognise the work of their call takers and dispatchers.

On 112 Day, Italy presented the official video advertisement of the 112 service, distributed on TV and other media throughout the Country!

The video was kindly provided by Dr. Alberto Zoli, member of the Commission 75-bis of the Ministry of Interior.

On 112 day, through the Public Security Police, Portugal carried out awareness actions in schools throughout the territory.

They also allowed visits to the 112 operational centres in Lisbon and Porto.

In Latvia, the officials of the State Fire and Rescue Service of Latvia (SFRS) went to schools to inform and educate students in grades 6-9 about 112.

Check below the activities organised in Lithuania:

•The Director of the Emergency Response Centre, Head of the Vilnius Division and one call-takers participated in 3 different radio broadcasts on that day.
• Four new video clips about number 112 were uploaded on social media and our website (http://bpc.lrv.lt/lt/video).
• One of the clips has been displayed on the screen in the two cinema theatres “Multikino” and “Pasaka” in Vilnius.
• The specialist from Klaipėda Division took part in the event “Emergency phone 112”, which was organised in one of the Kindergartens in Šiauliai City. -Representatives of Emergency Services were invited and children from three Kindergartens participated in this event. Children were familiarized with Emergency number 112 and all Emergency Services: police, fire brigade and emergency medical service (photos from that event are attached).

Sweden is organised a full day dedicated to emergency services with seminars and other activities.

A 112 Awards Ceremony was organised to award collaboration.  Previously, the award was awarded to, among other things, the rescue effort for 12-year-old Dante in 2018 and the response to the terrorist attack in Drottninggatan in 2017.

Actions were carried out in the different regions

In Asturias, the Red Cross in Mieres raised public awareness about 112. The activity planned in Mieres consisted of distribution of information on the street, as well as an awareness activity in the town hall square in which the Red Cross and the municipal police service  participated.

In the Basque Country, the Directorate of Emergency Care and Meteorology published a press release and organised an Awards Ceremony. Distinctions were given to public entities and volunteers from the field of Civil Protection were publicly recognised with a diploma for their 10 and 25 years of commitment to the Security Department.

Also, medals were awarded to recognise citizen involvement in the safety of people, their property and collective heritage, in situations of serious collective risk, catastrophe and public emergency.

The Emergency Service 112 Castilla-La Mancha hold a school drawing competition. The winner of the competition received a certificate.
During the day, the children met firefighters, doctors, police officers and other members of the emergency services.

Madrid – 112 Emergency Centre
112 Madrid celebrated by creating a special radio station to highlight the very important role that amateur radio operators play in natural disasters and major emergencies when communications in the affected areas are disrupted.
They will be on the air on Sunday 9 February with several amateur bands with the special call sign EG4UUD.
In addition, on Monday 10 February, there was a ceremony to give recognition to individuals and institutions. 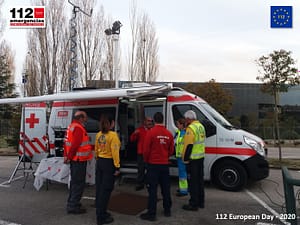 The actions that the 112 Extremadura will carry out this year will be:

The Cantonal Emergency Dispatch Centre of St. Gallen is working on improving AML and eCall services in the country.

The year 2020 will be a chance to bring these projects to a new level. In cooperation with the government, many different specialists, various committees and the big mobile telephone operators, the dispatcher centre is are looking forward to a new standard of emergency call services in Switzerland.

On 31st January, they organised a blood donation campaign.

•An intensive social media campaign was planned in different media outlets. Testimonials of 112 operators and messages on street billboards and in the metro encouraging people to make responsible calls to 112, are some of the actions.

•The integrated dispatch center in Bucharest hosted a press conference about the Romanian 112 service, the 112 statistics for 2019, as well as the new facilities of the 112 system which will be implemented during the next period in the country e.g. Advanced Mobile Location (AML).

•112 operators were in the most popular Romanian morning shows to talk about their work and to give useful information to the audience.

•The integrated dispatch center in Bucharest also received groups of children in the 112 centers and show them the people behind the emergency calls.