JOIN THE EENA CONFERENCE 2017 TO HEAR ABOUT FIRST-AID & MIRACLES…

EENA is delighted to announce that Mr. David Ginola, Ambassador of the first-aid campaign “Adoptons les comportements qui sauvent”, and former international football star, is joining us at the EENA Conference 2017 (5-7 April in Budapest, Hungary). 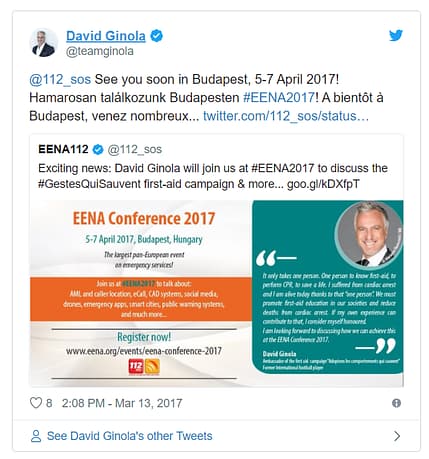 Are you wondering how David got involved with first-aid? It was actually due to his own experience with the issue.

In 2016, David was participating in a charity football match when he suddenly collapsed. With emergency services at the scene eight minutes after his cardiac arrest, he survived thanks to a witness who performed CPR until an ambulance arrived at the scene; if it wasn’t for this person, he would have died.

Join us to hear more about David’s story, the impact it had on his life and his fight to reduce the number of deaths caused by cardiac arrest, only at #EENA2017!