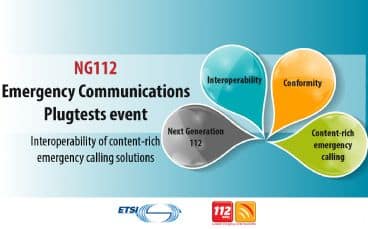 10 March 2017, Sophia-Antipolis – The 2nd edition of “Next Generation 112 (NG112) Emergency Communications Plugtests™ event in Europe” has been completed in the premises of ETSI.

“Next Generation technology is ready for us to use. More importantly, it is future-proof as it can continuously integrate new features.” said Cristina Lumbreras, EENA Technical Director. “Emergency services need to adopt NG112 solutions, one of the best investments they can make to provide the highest quality of services to their citizens.”

While the 2016 event edition focused on voice and geo-localization solutions, the 2017 scope was extended to content-rich emergency calling, such as video calling, instant messaging and file transfers. Participants put their products to the test, gaining valuable insights from experiencing a variety of scenarios. Tested technologies included Advanced Mobile Location, PEMEA (the Pan-European Mobile Emergency Application) and more.

We would like to thank Com4Innov who supported the Plugtest by providing the access to their 4G/IMS network as well as the support of the Emergency Call over IMS to manage this testing campaign.

ETSI and EENA would like to thank all participants for joining. The event’s outcomes, and mainly the lessons learned, will contribute significantly to the further development of Next Generation solutions and, as a result, to the improvement of emergency response in Europe and the world.

About the NG112 Communications Plugtests event

The concept of “Next Generation 112” (NG112) has been identified as a potential answer to the increasing requirements and demands of content-rich emergency calling. The NG112 Communications Plugtests™ event was organised by ETSI and its Emergency Telecommunications special committee (EMTEL), and EENA (the European Emergency Number Association), and saw a testing campaign based on the use cases developed by ETSI and EENA. The event is supported by the European Commission.

EENA is a Brussels-based NGO dedicated to contributing to high-quality emergency services. EENA serves as a discussion platform for emergency services, public authorities, decision makers, researchers, associations and solution providers with a view to improving the emergency response in accordance with citizens’ requirements. EENA is also promoting the establishment of an efficient system for alerting citizens about imminent or developing emergencies. EENA memberships include more than 1300 emergency services representatives from over 80 countries world-wide, 80 solution providers, 15 international associations/organisations, more than 200 Members of the European Parliament and more than 90 researchers.

ETSI produces globally-applicable standards for Information and Communications Technologies (ICT), including fixed, mobile, radio, aeronautical, broadcast and internet technologies and is officially recognized by the European Union as a European Standards Organization. ETSI is an independent, not-for-profit association whose almost 800 member companies and organizations, drawn from 67 countries, determine its work programme and participate directly in its work.