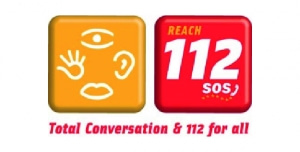 From 2009 to 2012, REACH112 (REsponding to All Citizens needing Help) project aimed at piloting an accessible alternative to traditional voice telephony that will be suitable for all. While people with disabilities find it hard to communicate with the existing solutions, REACH112 provided modes of communication so that they could find a way to communicate in each situation, may it be with a live real-time text conversation, with sign language, with lip reading, with voice or with any simultaneous combination of these modes described by the concept of Total Conversation. The service aimed at being of benefit for all.

Meanwhile, there was an urgent need to improve access to emergency services for people with disabilities in the EU. REACH112 implemented a 12-month pilot in Sweden, UK, The Netherlands, France and Spain allowing disabled users to communicate at a distance with each other and directly with the emergency services. IP devices were provided in the homes, workplaces and on the move, connecting the users simultaneously in video, voice and text. Users were able to connect between countries and different service providers, on mobile and fixed IP networks. They also connected through a third-party service (relay) with voice telephone users. The service was integrated with existing telecommunication platforms and emergency service frameworks. Additionally, a protocol for the exchange of information between emergency services was made available so that relevant data can be transferred to the most appropriate emergency service.

REACH112 had been a blueprint for the extension of IP-based communications, Total Conversation and emergency services in the EU. It provided guidance for the improvements of communication between all citizens – in particular those with disabilities – as well as the accessibility and call handling of all EU emergency services.

This project was co-funded by the European Commission within the ICT Policy Support Programme (Grant Agreement Number: 238940).